Tested for compatibility with both Epic Games Store and Steam version of Train Sim World 2.

What This Mod Does

Gameplay: This is not a reskin - this mod adds the CSX MP15DC in YN3 livery and replaces the GP-38 in 15 Cumberland Yard Services as well as adding it to the Cumberland Switchback Scenario. The original Caltrain MP15DC CT is still fully available for use on the Peninsula Corridor route, this mod simply adds a variant of the MP15DC, in YN3 livery, that is completely independent of the Caltrain loco. However, you do need to own the actual MP15DC add-on in order to be able to use this mod.

Locomotive: The model itself had to be modified just to allow for a proper CSX logo on the loco, not to mention the new paintjob and decals. I had to modify and re-import both the Exterior and Cab meshes of the locomotive. The resulting model is a fairly accurate representation of an actual CSX MP15DC in YN3 livery. Furthermore, once imported into Unreal, proper paths had to be set to the assets used by the locomotive to essentially make it possible to turn it into a stand-alone locomotive independent of the Caltrain one (although they do share some features).

Optional: Also provided in the zip file for Version 2.1 is "TS2Prototype-TS-SPG-CSX-MP15DC-FlippedFormation.pak" (created independently by Lunamoon), which is an alternate Nose to Nose formation for the majority of the services to spice things up. If you wish to use this Nose to Nose (Cabs out) MP15DCs , please install this file along with the main mod pak following the instructions below.

Appreciation: If you appreciate the literal hundreds of hours of work that went into making this mod a reality, please consider a PayPal donation as a show of support if you would like to see more mods of this caliber in the future.

Version 2.0
⦁ Separated the loco into it's own entity, thus leaving the Caltrain version of the MP15DC intact - this part actually entailed a whole lot of development
⦁ Adjusted the glossiness of both inside and outside of the loco
⦁ Other miscellaneous tweaks

Version 1.1
⦁ Edited the textures and made sure there are no mis-textured parts, also changed the tone of the blue color ever so slightly to match existing stock a tad bit better, and a bunch of other touchups
⦁ Corrected various smoothing issues on both the Exterior and Cab meshes, overall presentation should be better
⦁ Removed Brake Cut-out and compartment from the Exterior model
⦁ Removed roof scoop from the Exterior model
⦁ Removed the 2 blank screens from the Cab model (top of control stand)
⦁ Added more decals (Watch Your Step, F (front) decal)
⦁ Added proper CSX MP15DC road numbers 1140 - 1149 (initial release used only 2 from original release)
⦁ Other misc. corrections

Version 1.0 - Initial Release
⦁ Substituted GP-38 with MP15DC on 15 Cumberland Yard Services
⦁ Added MP15DC to Cumberland Switchback
⦁ New menu Thumbnail
⦁ Modified Exterior Model of MP15DC
⦁ -- Removed the polygons for the old Caltrain decal along with the hinge covers
⦁ -- Extensively changed UV map to allow for new livery
⦁ -- Added CSX logo decals to both sides, and remapped the hinges underneath the Logo so that the paint on the hinges matches
⦁ -- Added a bunch of decals all around the loco
⦁ -- Changed road numbers to all be 4 digit
⦁ -- Modeled and UV mapped new ditch light box, moved up all ditch lights to be accurate and on the same height as all CSX locos
⦁ -- Removed number board hood from the front of the cab, moved Horn to main roof (was on top of the removed hood)
⦁ -- Added number boards to the front of the nose
⦁ -- Deleted cup holder looking thing that was above the left ditch light on both front and back of loco (it's not present on CSX MP15DCs)
⦁ -- Besides the glass and like 2 cab textures (dials and whatnot), all other textures and maps were changed, some created entirely from scratch
⦁ Modified Cab Model of MP15DC
⦁ -- Changed road numbers to 4 digits
⦁ -- Modified/Removed some other decals
⦁ -- Fixed Rain FX/wiper not working on the front left cab door present on vanilla MP15DC

Huge thank you to Will from T.S.C. Discord for his incredible help (in more ways than I can describe), I'm not sure if v2.0 would be possible without him. Also, thank you to Schnauzapowahz for his overview videos. You can watch Schnauzapowahz' video below:

Please do not redistribute this file without permission. If you plan on using this for your own mods, please get our permission to do so first.

⦁ Download and extract the contents of "SPG_CSX_MP15DC_YN3_V1.2.zip" to a location on your Hard Drive.
⦁ From the extracted files, copy the file "TS2Prototype-TS-SPG-CSX-MP15DC.pak" into '(GAME_LOCATION)\WindowsNoEditor\TS2Prototype\Content\DLC', if you had a previous version of the mod, make sure you overwrite the old file.
⦁ If you wish to use the alternate Cabs Out (Noe to Nose) MP15DC formations, also copy "TS2Prototype-TS-SPG-CSX-MP15DC-FlippedFormation.pak" along with the above file into your "DLC" directory.

NOTE: Please remove any other modifications that may alter the MP15DC Locomotive. An example of such a modification would be the "Amtrak MP15DC" mod by Yuri (a.k.a. Anna_AWVR).

Previously uploaded files have been downloaded 598 times before being withdrawn.

This mod is amazing! you guys did a great job I would love to see more things like this.

Thank you very much!

It does indeed, thank you 😄

I bought the CalTrain MP15 and I installed the file into the correct file and after opening the game the CSXT doesn't show up, is there a way around this?

If you've installed both the MP15 DLC and the mod above properly, you will see the MP15DC as the last loco when you go into Services on Sand Patch Grade.

I installed both properly and still don't see it within the game so I'm not sure what is wrong.

Click on Train Sim World 2 in the Steam Library, this will show the game's page. On the right hand side, there will be a DLC section, and on the bottom right it will say "Manage my X DLC", click that, and in the following window, make sure the Caltrain MP15DC Add-on is checked.

I'm currently working on an update, but when I'm done I'm gonna further investigate your issue.

Just looked and it is checked.

Alright well Version 2.0 is done and being released today. I will shift my focus to investigating your issue. I need to know for myself, especially since I'm pretty sure v2.0 will make the YN3 loco unavailable to anyone without the SFJ route. Give me a few and I will get back to you. Also, I would recommend joining the TSC Discord server and hitting me up there, it will just make things easier.

It looks like you installed multiple MP15 mods. Remove the Amtrak MP15 reskin!

I installed the update and it worked fine for the SPG Loco but the Cal Train Loco remained CSX. Puzzled!😕

Yeah because the original version of the mod was a reskin of the Caltrain loco. You have to download version 2.

Thank you. I was a day early.

This piece of equipment just tops the cake. This sure does bring SPG back to life for sure. Thank you for all your hard work and bringing this and other mods to this game and making it fun to play..

You're welcome my man. I am glad you are enjoying the fruits of my labor. 😄

hi
this mod gives me a ctd when i load a scenario :(

Whatever issues you are having, they are not caused by my mod. I have verified each and every scenario in SPG loads fine with the mod installed, even the Free Roam scenario (which has the MP15DC in it as well) works flawlessly.

Hello TheShotte. I followed instructions and downloaded this mod yesterday. Unfortunately I noticed the CSX logo on the sides of the locomotoive, as well as some texutres on the panel above the fuse cabinet, are showing up as gray boxes. I don't have any other MP15DC mods or SPG mods, and tried reinstalling it but get the same result every time.

Update: I tried on a fresh install of the game with no other mods, which unfortunately didn't work. I also tried it with and without the FlippedFormation.pak file, but still no result either way.
All the missing textures I found are:
Front and rear steps onto the loco
Warning abels inside the step wells
Steps on the cab end leading into the door
Two small warnings next to those steps
Square in the door itself
CSX Logo on the sides of the hood
Various other small labels alongside the hood
Emergency stop switch red border
Some light switches on that same panel (above the fuse cabinet)
Exterior emergency fuel stop logos

Front and rear signal lights are missing their silver-ish reflective insides, however, they don't show the gray checkerboard found on the other missing texture, just the same color as the outside

From videos I watched of the mod, I assume it's just all custom textures not getting ported over. Otherwise it's a really beautiful mod and I can't wait til I can get the textures to work properly so I can put some hours in with it installed.

I can confirm that I am seeing the same missing textures.

Very good mod ! but no CSX logo
me to 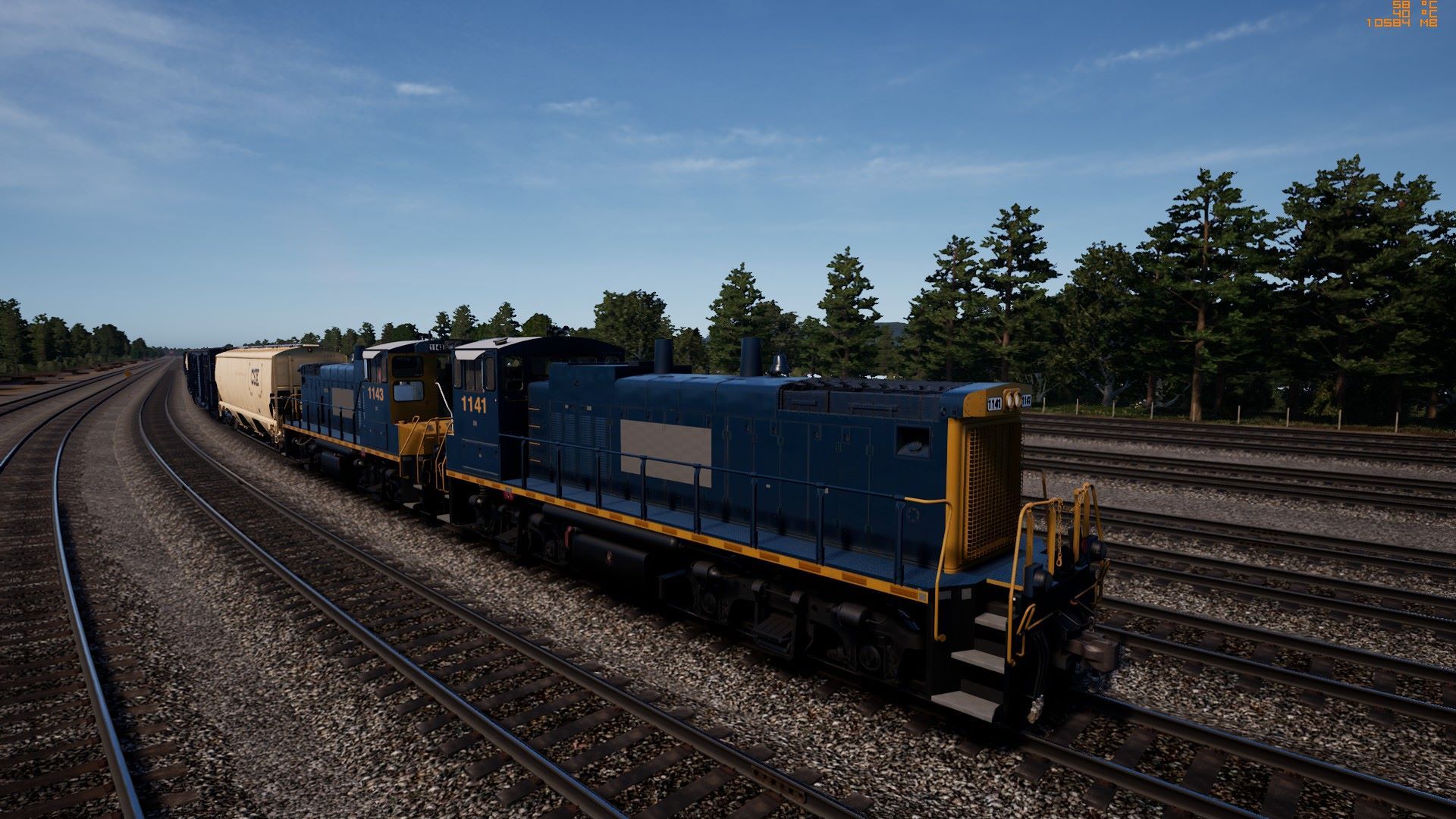 Can confirm. This is how it looks for me too.
Bummer, very nice work on the mod, but some textures got scrambled

Great mod, but logos missing for me too.

Did anyone ever figure out the logo and other texture problems?

As others pointed out, the textures are missing, AND it ruins the Boston Sprinter timetable, basically restoring the old one by the looks of it. It removes the ACS-64 depot services and causes an imediate derailment for Amtrak Northeast Regional #177 and #179.

I'm not able to get this to work at all.
Have extracted the TS2Prototype-TS-SPG-CSX-MP15DC.pak into my DLC directory, and removed all but official PAK files, then verified that the MP15 DLC does work fine in the Bay Area scenarios and is properly loading there.
Then tried a few of the Y series scenarios on SPG, and none of them have the GP38 replaced by this.
Interestingly, upon download Chrome warned of this being a dangerous file, even after trying a couple times. Then did override upon download. This happens very rarely on file downloads.
I specifically bought the MP15 DLC to use on SPG, so it's quite disappointing.
Not sure if this is corrupted or what, but it's doesn't work at all for me at this time.